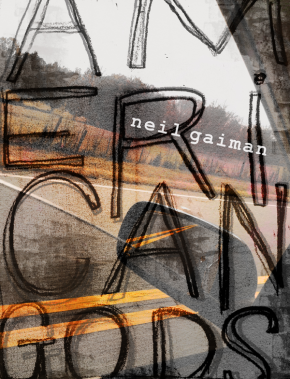 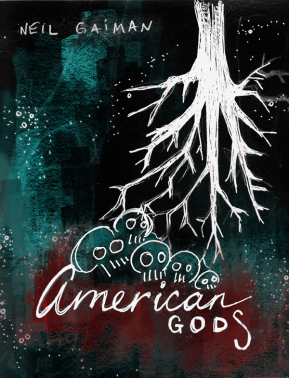 For my year-long book cover project, I present these three covers for American Gods by Neil Gaiman. I hear there’s a movie or show being filmed of it now, so I wanted to give it another read. Neil Gaiman is one of my favorite storytellers, and this is probably one of his best. I love the way he casually reveals mythology woven into the fabric of reality, picking and pulling at hidden strands ’til they bulge and fray on the surface.

I would definitely read this book again. It’s a keeper.

Up next for the book cover challenge: The Man in the High Castle by Phillip K. Dick.

Tom Robbins has been one of my favorite authors for many, many moons. Villa Incognito is one of his newest books. It’s got all the familiar Robbins tropes—the distinct spicy flavor and colorful phrasing, outlandish plots and kooky characters… but sadly, the story doesn’t really hold together very well. Tom was quite advanced in age at the time of Villa’s writing (2003); and since he’s previously written many  a brilliant and delightful book in his career, he will be forgiven for …this hot mess.

Tom was still kickin’ it in the Pacific Northwest last time I checked. Hope what I said about this book doesn’t get back to him. I love Tom, I do. See how I put his name down at the bottom with the tanuki (Japanese raccoon dog/trickster spirit)? That’s my tribute, see.

If you’ve never before read a Robbins, don’t start with this book. Get you some Skinny Legs & All, or Even Cowgirls Get the Blues, or Another Roadside Attraction, anything from that era.

Truth be told, I stalled out on this bookcover, having finished the book months ago—but I had no ideas whatsoever, and was overwhelmed with a certain malaise of disappointment and inertia. And weirdly, I felt like I couldn’t move on and read another book until I’d fulfilled my commitment to draw a cover for this one. Afterall,

…a promise one makes to oneself hurts twice as much when it’s broken.

And now I am finally free to move on to the next great read, yay!

Finally, the next installment in my Book Report project (in which I endeavor to illustrate every book I read in 2016); I actually finished reading this book several weeks ago and I’ve spent much too long dawdling about on the illustration.

Haroun and the Sea of Stories is a charming little tale by Salman Rushdie, with a distinctly Indian flavor. I love Rushdie’s writing—I can hear the accents in his dialog, and smell the curries in the air. He paints a lovely wordscape and vivid, vibrant characters to populate it. In the right hands, this story would make a great animated film.

Instead of drawing multiple small covers like I’ve done before, this time I drew one full-page, rather elaborate doodle in marker, pens, and color pencils. I wasn’t completely thrilled with the overall effect, so I worked with it a bit in Photoshop. Still not 100% satisfied—the photoshopping is a bit too obvious, methinks, but it’s better. There’s a lot going on there; I really like the various parts of it, just not all together. I can hear my inner Art Director telling me to make the bird bigger, and simplify, simplify, simplify.

Pyramids, the seventh installment of Pratchett’s Discworld series, is set in a land that looks, smells, and acts a lot like ancient Egypt. My favorite part of this book is a minor supporting character— a camel named You Bastard, who is, in fact, the greatest mathematician in the world.

“It’s not for nothing that advanced mathemathics tends to be invented in hot countries. It’s because of the morphic resonance of all the camels, who have that disdainful expression and famous curled lip as a natural result of an ability to do quadratic equations.”

Apparently math skills evolved as a survival trait among camels, and also because they spend a lot of time just sitting around with nothing to do but count grains of sand and work out complex algebra in their heads. So yeah, makes total sense.

Overall, it was an enjoyable read, full of puns and witty banter. It’s the last of the Discworld series that I currently have in my possession, so I’ll be taking a break from Ankh-Morpork and surrounding lands for a bit… unless I run into a herd of Discworld books at a thrift store—they’re the type of book that usually travels in groups, y’see.

Next up on the reading list: Haroun and the Sea of Stories by Salman Rushdie

In other news, my map of Turkey is being featured this week on They Draw and Travel, as one of 2015’s Most Hearted Maps! (I never posted that one here- it was a super surprise Christmas gift for some very special peeps.)

Issue 7 of Ionic is due out soon, with another illustration by me. Ionic is a free online magazine about the intersection of art and science. This issue is all about 3D printing and I’m looking forward to seeing the other ARTicles.

And thus concludes my first post 2016. Happy New Year, everybody!

I have a read a few other books by sci-fi forefather Robert Heinlein, and I especially liked The Moon is a Harsh Mistress. This book, The Cat Who Walks Through Walls, takes place well after the events in Moon, and involves some of the same characters. Plus there’s a cat in the title, so I was pretty sure I’d love this book.

I did not. I think ol’ Bob got tired of writing it half-way through and forgot where he was going when he started. Just when the story begins to get some conceptual meat on its bones, it just ends.

Furthermore, the titular cat does not even show up until  page 288 of the 388-page book. Pixel, as he is called, is not at all relevant to the story. Neither is most of the book, for that matter. Maybe I just don’t get the literary significance of what Heinlein was doing in this book, or maybe it’s just not his best work.

I drew some covers for it anyway. Because book covers are cool, and I make book covers now, for every book I read, whether I like it or not.

The text on the third cover is a little poem, it reads “Tree-San in a little pot has no bearing on the plot. NEVERTHELESS… the bonsai tree has a bigger part”

“If you say in the first chapter that there is a rifle hanging on the wall, in the second or third chapter it absolutely must go off. If it’s not going to be fired, it shouldn’t be hanging there.”
— Anton Chekhov (From S. Shchukin, Memoirs. 1911.)

CORRECTION: It’s a violation of the Law of Conservation of Detail, an “anti-chekov’s gun” if you will, or a red herring, if you won’t.
Next up: Another book from Terry Pratchett’s Discworld: Pyramids.
Posted on December 1, 2015March 28, 2016 Posted in art + illustration, Book covers, designTagged bookcover, books, illustration, sketchLeave a comment

I picked up the Discworld series by Terry Pratchett a few months ago and read the first four books before I realized what was happening.

When I found out that there are approximately 40 books in the Discworld series I slowed my roll just a bit. That is not a financial or literary commitment I am ready to make right now. Like, I think I need a little space and to maybe like, read other books, y’know…

I enjoyed Mort, though it wasn’t my favorite of the Discworld books so far. (I hope the Luggage returns. I miss him…) So yah— in this one, Death, (you know—the Capital D, Proper Noun skeleton in the hoodie with a scythe-that Death—takes on an apprentice, a clumsy ginger kid conveniently named Mort. Hi-jinks ensue. I think it might’ve ended weird, but honestly I’ve read another book since I finished it; I don’t remember it very clearly…

I drew up covers for the other book too, still in progress. That’s my new thing now, I do bookcovers. Bookcovers are cool.