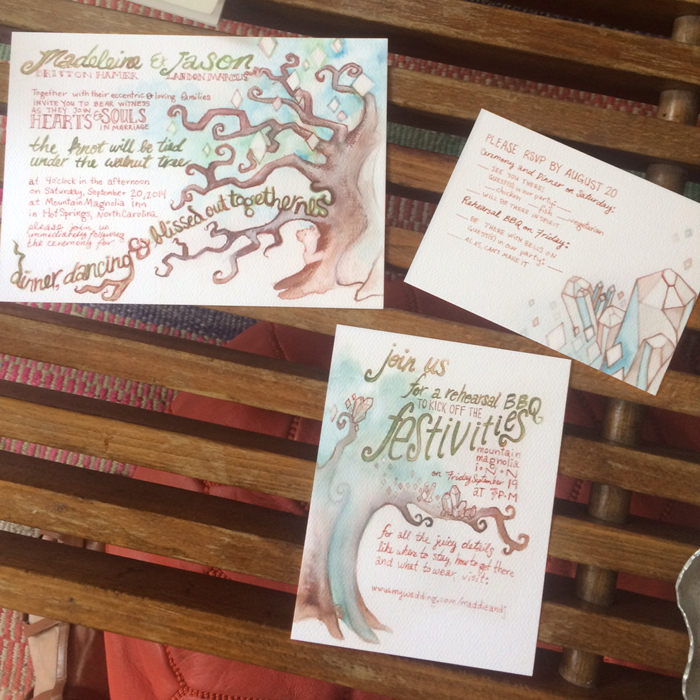 Two very dear friends of mine are getting married in a few months under a big old walnut tree in North Carolina. I was honored when the bride asked me to design the invitation suite, and thrilled when she told me what she had in mind. I was even more excited when she requested that all the text be hand-lettered as well. We had a really tight deadline, so I spent several evenings on sketches and an entire weekend painting and digitizing the files to be print-ready.

Mads sent me these shots of the final product back from the printer. Love the paper choice—looks like it’s got a nice, toothy texture. This was a really fun project and I hope I get the chance to do more work like this soon.

Currently in the pipeline, I’ve got a big website update coming… eventually, and a new travel illustration—Amsterdam, Bavaria and Northern France, oh my! 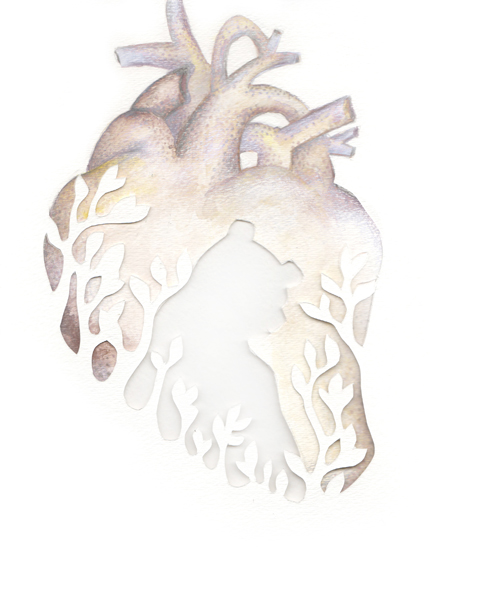 My dad was a landscape artist. He created a lovely natural oasis in the backyard complete with fish ponds, waterfalls, and brick-lined paths. There was a covered swing, and birdfeeders, and lots and lots of daylillies. I draw bears whenever I miss him, because he was very much like a bear. He was shaped like one, and he could be gruff when hungry or irritated, and downright fierce if his family was threatened. He also had a soft side–a warm and tender and cuddly, huggy side, and a very big heart.

This is my final project for Eccentric Illustration; the theme was “Evoking Emotion.” The timing was uncanny, falling around the first anniversary of losing my dad.

Goodbye, Penelope. Welcome, Thomas! Illustration Friday has had a change in management, but will continue on. This week’s topic is farewell. I did this little drawing last week as a mother’s day gift for my stepmom. It’s a bit of a family portrait really– the bear, of course, is my dad– note the blue slippers. Over on my other blog  (a blog about a book about a dog), I’ve posted it as a coloring page, in case any little kiddos out there want to make something nice for mom this year.

Thanks for popping in!

The Illustration Friday topic this week is eye glasses. This is Annabelle’s dad, for my children’s book in progress, Annabelle & the Bear. Obviously I need to go back and sort out his left hand (top). I liked it fine until I got his right hand drawn and it was so much better…

I’ll be posting more from this story and hopefully an update on the other book Loupotamus on Square Dog, Round World sometime this week. Melissa (the writer) was in town last week and we made much progress on the story line. I’ve been developing the storyboard while watching Dr.Who on my laptop every night. It’s going well so far, but I still have a long way to go– Allons-y!

This week’s Illustration Friday topic is whisper. I didn’t want to be too literal, so I sketched up a moment where one might be inclined to whisper instead of depicting the action outright. This is a scene from one of the children’s books I’m working on called Annabelle and the Bear.

One day I’m going to get to the part where I do something that actually looks finished. And when I do, I promise I’ll scan it in properly instead of photographing it with my iphone.

But right now, I’m still roughing out the general look, technique and process. I’m rather fond of the tree on the left, and the albino squirrel that lives in it.

I’m also rather fond of the bear, who reminds me of my dad. Generally, all bears do.